After nearly 40 years in Showbiz – actress Sharon Stone has ‘seen it all’ in Hollywood. Kind of ironic, when you consider anyone who’s ever watched the film; “Basic Instinct” has pretty much seen all of Sharon Stone.. cough, cough!

And I can imagine if anyone has, she has experienced, heard about, seen first-hand and lived to tell the tale when it comes to sexual harassment.

As alluded to earlier, most of us probably remember Stone’s brilliant and sexy role with Michael Douglas in the 1992 movie ‘Basic Instinct’. Who could forget the infamous leg-crossing scene in which her… (rhymes with ‘Wussy’) was exposed. Oh Google it, you perv.

Btw, Sharon claims that was filmed without her knowledge. Kind of dubious though – seeing as how she knew she wasn’t wearing any unmentionables at the time. And the camera was at the right height. And… oh, forget it. If you can. Good luck.

What you may not have seen is when Lee Cowan on CBS Sunday sat down and interviewed Stone, 59, to discuss her past history in Hollywood, in light of all the #metoo uproar and news of Hollywood director Harvey Weinstein’s sordid activities.

‘I don’t know how to ask this in a delicate way, but were you ever in a position like that, that you felt that you were uncomfortable?’ Cowan asked Stone in the clip.

The question caused Stone to erupt in laughter, while a nervous Cowan tentatively asked: ”You’re laughing, but I don’t know if that’s a nervous laugh, or an Are-you-kidding-me-of-course-I-was laugh?”

Stone gathered herself and looked at Cowan, and responded: ‘Oh, I’ve been in this business for 40 years, Lee.’ ‘Can you imagine the business I stepped into then? Looking like I look, from Nowhere, Pennsylvania? I didn’t come here with any protection. I’ve seen it all.’

You could probably have known that in advance as more and more victims of sexual harassment in Hollywood join the #MeToo movement. And more and more scumbags and perverts like Harvey Weinstein and Kevin Spacey are made public.

More and more voices rally around #TimesUp initiative to speak out against sexual misconduct.

Actress Sharon Stone also also spoke about her medical crisis over a decade ago. A crisis which almost cost the actress her life.

‘There was about a five percent chance of me living,’ said Stone.

‘Did you have to sort of start over and relearn all of this?’ asked Cowan.

Stone then added: ‘Others aren’t that interested in a broken person.’

CBS’ Cowan responded by asking: ‘So you just felt alone in a lot of ways?’ 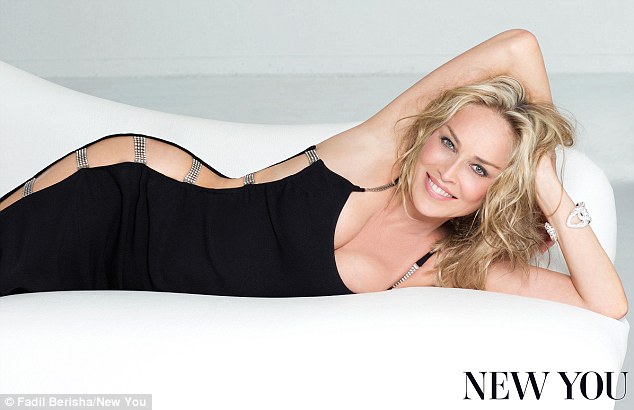 Stone said that when she did get work, things were also a bit off around that time.

‘I’m sure I seemed peculiar coming through this all these years, and I didn’t want to tell everybody what was happening because, you know, this is not a forgiving environment,’ explained the actress.

But Sharon Stone seems to have made it through the years well. Now, she balances her career with her family, raising 3 sons as a single mother.

‘I just was not the girl who was ever told that a man would define me. It was, that if I wanted to have a man in my life, it would be for partnership,’ said Stone.

‘It wouldn’t be an arrangement; it would be an actual relationship. And since those are pretty hard to come by.’

Stone was the lead in Mosaic on HBO, which premiered in January. Stone plays the author Olivia Lake in the Steven Soderbergh mystery which follows the murder of the children’s book author.

About the role Stone said: ‘We were raised to accommodate men, particularly in my generation.’

‘We’re starting to acknowledge our own gifts as women and not think that we have to behave as men in order to be empowered or powerful or valuable.’

It’s hard to imagine that ‘Basic Instinct’ is over 25 years old. I guess those were the days. Now it’s time for Hollywood pervs like Harvey Weinstein and Kevin Spacey to pay their dues. #TimesUp